They quit their jobs, mapped out their plan, and hit the road to explore all 59 US National Parks. With their yearlong mission finally coming to an end, the happy-go-lucky couple will soon return home to the Midwest, but here’s Cole giving us one last update on their latest adventure in Glacier Bay National Park.

After a driving marathon of 50 hours over 7 days (including days in 2 Canadian National Parks), our Drive Assist finally told us we’d completed our journey from Kansas City to Alaska. But the traveling to our first Alaskan National Park was far from over! 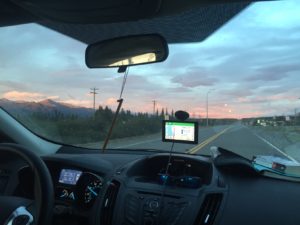 Five of the eight Alaskan National Parks don’t have roads. So for our first stop in the state-wide tour we regretfully said goodbye to our car to hop on the ferry going from Skagway to Juneau. Even the state capitol doesn’t have a road leading to it, but luckily we found public transportation on the waterways of Alaska deliver some amazing scenery. From Juneau we boarded a ferry to a small town in the heart of the Inside Passage called Gustavus, and we hitchhiked the final 10 miles to Bartlett Cove. At last we were in National Park #52, Glacier Bay!

Our first day focused on learning all about the park through different ranger programs, exhibits and, our favorite, the park movie. Apparently 90% of visitors to Glacier Bay never set foot on land because they go through on cruise ships. We agreed it would definitely be a shame to miss out on hiking through the lush temperate rainforest or exploring the oozing tide pools in the area surrounding the Visitor Center. It was fascinating to learn about the signs of glacier activity all around us. Just 250 years ago, the whole bay was filled with glacial ice thousands of feet thick. Now the closest glaciers have receded dozens of miles to the back of the bay and the newly uncovered land is flourishing with plants, animals and literally rebounding as the land after relieving the compression of millions of tons of ice. 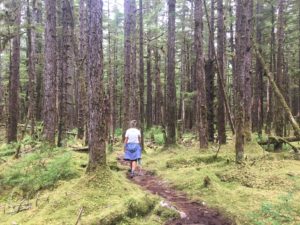 However, we couldn’t deny the main attraction of the park was getting on the water and into the bay. Instead of the typical day cruise to visit the glaciers, we decided to rent kayaks for the day and have our own excursion around the nearby Beardslee Islands. I think we made a great decision.

The kayak rental came complete with everything to make us feel like pros as we set off in the unfamiliar frigid waters – wading boots, waterproof pants, splash skirt, life vest and, best of all, a real sea kayak. We love the convenience, compactness and affordability of the inflatable sea kayak we’ve used to get on the water throughout the rest of our trip (from Big Bend to Yosemite to Dry Tortugas), but it’s bulk and drag can make for some tough paddling. Our rental felt like an Indy car in comparison. 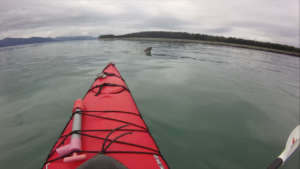 We turned on the GPS tracking on my fēnix 3 so we wouldn’t get lost in the maze of Beardslee Islands at the front of Glacier Bay and raced off. Our route was affected by the dramatic tidal changes of up to 24 feet in six hours. Certain passageways between islands were only accessible at high tide. And even if your timing was right, your progress could be sped or slowed (depending if you were paddling with or against the tide) by the crazy currents of up to 6 knots created by the tides rushing in or out. 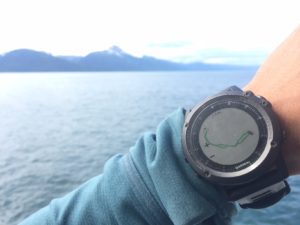 Once we had a handle on the tides and our route, it didn’t take long for the wildlife spectacle to begin. We saw tufted puffins flap furiously across the water’s surface. There were humpback whales spouting and flashing their tales slapping 30 yards from our kayak. Black bears patrolled the sandy shores and disappeared into the bushes. Bald eagles soared overhead and perched high in the trees. Sea lions popping up in front of the kayak. Sea otters played with each other and sped away from us effortlessly in the current.

Then we heard a sound like a thunder clap. It came over and over. We tried to guess what it was. Perhaps glaciers calving many miles away? But then we saw the source. And it was one of those moments where you breath is taken away and you don’t know if it’s really happening. It was a humpback whale breaching. It was such anticipation because we never knew if or when the giant creature would explode from the water again. As the show continued in front of us, there were several other whales spouting on the side and then we heard the breaching start behind us as well. It was magical. 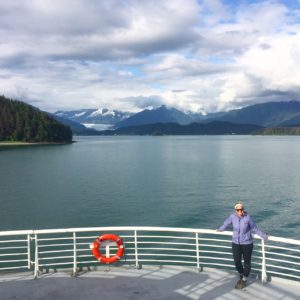 We were so thankful we had brought our waterproof VIRB along to capture some video and photos. But nothing will ever match the feeling of watching those magnificent creatures all alone on the bay on our kayak. Just like no other National Park to date has matched the incredible wildlife we saw in just six hours of kayaking at Glacier Bay.