Off the Beaten Path: Exploring Iceland’s “Waterfall Way” and Beyond with Joost Schreve

Until 2010 Eyjafjallajokull was a fairly unknown volcano in the South of Iceland. Its unremarkable shape, more like a big plateau rather than a pronounced cone like most of the world’s famous volcanoes, helped it linger in relative obscurity for many years. But when it erupted six years ago, it quite literally burst onto the international scene: The ashes it spewed into the atmosphere grounded transatlantic air traffic for several weeks.

While this didn’t seem like a great way to promote Iceland at first, the images of Iceland’s powerful nature being broadcast across the world provided an unexpected platform to promote Iceland as a unique travel destination. In the years that followed, tourism to Iceland increased significantly.

Another consequence of the eruption of Eyjafjallajokull was that the landscape around it was altered by the flow of magma. Most strikingly, two new small mountains were formed on the volcanic plateau where the eruption took place, along with dozens of waterfalls that dot the trails between them. This natural wonder is a spectacular place for a one-of-a-kind hike. So, when the kimkim team was in Iceland to meet with local travel specialists, it wasn’t hard to decide where we would spend our free day: The Fimmvorduhals trail, one of the more popular day hikes in Iceland, leads straight through the heart of this amazing geologic theater. 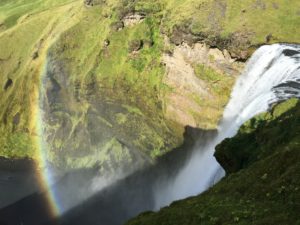 Finding the Perfect Guide, and the Right Navigation

We met up with Siggi, the founder of Midgard Adventures, in their office 8 am, where he gave us a quick tour of the new hostel they are building. After a strong coffee we headed toward the trailhead at the foot of the Skogafoss Waterfall, which is an amazing natural wonder in and of itself. Siggi joined us on this hike, and he gave us very interesting insights into Iceland’s recent history: The financial crisis of 2008 greatly affected Iceland’s economy but made it more affordable for tourists. Just when Siggi was about to start his adventure travel company, Eyjafjallajokull erupted right in his backyard, and his town became overrun with international media. He guided reporters from BBC, CNN and many others into the volcanic eruption zone, and was even recognized by Korean travelers years later as the “Viking” who showed Iceland’s volcanoes to the world. 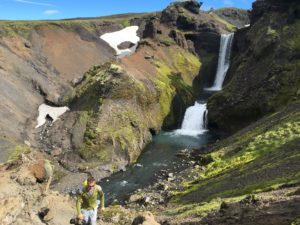 While we hiked and talked, we enjoyed spectacular views of the 26 waterfalls on the Skoga river cutting through the green hills. Navigation at this stage of the hike was quite straightforward since the trail is quite pronounced and follows the river valley.

After a few hours we reached the volcanic plateau. Crossing a narrow bridge, we reached the suddenly barren plateau. Since the landscape here is more even (volcanic rocks wherever you look), and weather can be quite variable here, with fog sometimes drifting in quickly, it was important that we had the right navigation tools. Our Garmin Oregon, with the trail’s GPS track loaded on it, provided the right kind of safety net for us here. 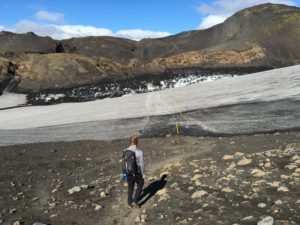 We could see the Fimmvorduhals Mountain hut near the crest of the plateau with Eyjafjallajokul hiding in the clouds to the left. The trail sloped up the plateau in broad curves, while the air was feeling colder. After another hour or so we reached the hut. Since Siggi is, unsurprisingly, close friends with people who are part of the trail ecosystem in South Iceland, we were welcomed warmly by the woman who runs the Fimmvorduhals hut, and we talked for a while before continuing the hike. 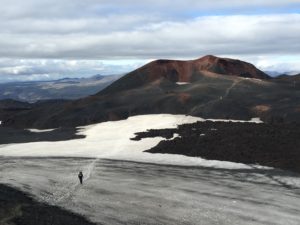 Snow, Dust and Heat Beneath the Earth

Above the hut, the landscape changes dramatically again. Here we were crossing snowfields, covered with a thin layer of volcanic dust. Another 30 minutes farther we reached the crest, where the amazing volcanic theater opens up, with new small mountains Magni and Modi clearly visible at the other side of a couple of snowfields.

Siggi explained how the eruption unfolded, and where the fissure opened up, spewing magma from dozens of openings. As we approached Magni, Siggi pointed out that by digging a small hole between the volcanic rubble you could still feel the warmth of the rocks. It was quite amazing to feel the volcanic energy still present six years after the eruption. As we crossed Magni and Modi, we all took in the amazing views of the red rocks, with the greyish, greenish hills from Thorsmork valley and beyond, setting a nice contrast.

While we were about two thirds of the way there, and it was all downhill from there, it was still a strenuous hike down steep trails towards Thorsmork valley.

We reached our camp in Thorsmork with still some daylight to spare, so we had time to collect firewood for a bonfire in front of our tents. As it got dark we hoped to get lucky and see the Northern Lights, a rare occurrence in August, but they didn’t make an appearance this time. I guess we will just have to go back!