As a tournament fisherman and full-time fishing guide, I depend on all of my equipment day after day after day. I stick with products upon which I can depend to help me catch fish; otherwise, they won’t be in or on my boat and one of the keys to my success this season were my Garmin marine electronics. I have always been a fisherman that relied on electronics to find fish, but this year I found out that my Garmin units could help me catch fish in ways other than seeing them on the sonar screen.

My Garmin marine electronics played a big role all year in my success, from showing fish on the ClearVü and SideVü scanning sonars, to finding places on the map, and even displaying my engine data. 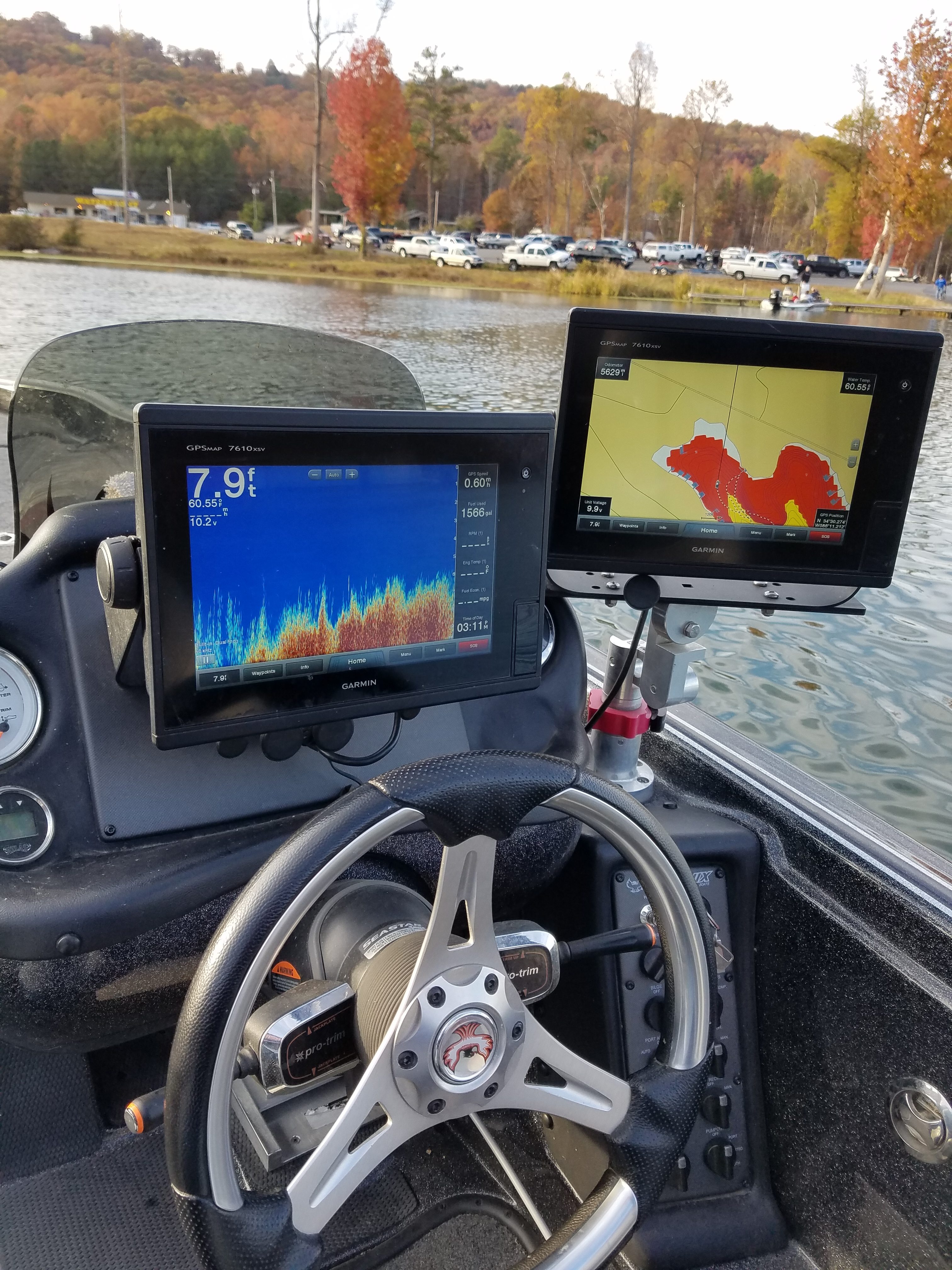 As I became more familiar with my new units, I learned that I could display my fuel economy on my graph. This was a very important factor in two Alabama Bass Trail tournaments in which I finished 3rd and 7th. I had reservations about making long runs in the past, but with my instant fuel economy displayed, I was now able to run the optimum speed to get the most mileage out of my 50-gallon tank in my Phoenix 920XP. This allowed my partner and I to travel 84 and 92 miles one-way in two different tournaments with the peace of mind in knowing that we could make it and not worry about running out of fuel. As I mentioned earlier, it paid off with 3rd and 7th place finishes in the South Division and allowed us to finish in 2nd place in the year end standings.

In another South Division tournament, the Garmin LakeVü HD Ultra MaxDef mapping gave us a huge advantage. Very early in our practice, we were able to determine a specific type of contour that was holding nice fish. These were places that did not show up on any other type of mapping software. For two days we just looked at the Garmin mapping for similar places, rode over and made a few casts on each, catching at first and then shaking off fish and nearly every spot that was “right”. It was the easiest practice I have ever had in locating fish. In the tournament, we had over 20 places to fish and never had another competitor to worry about. We wound up in 2nd place for the tournament with over 18lbs.

In the North Division, the traditional sonar and ClearVü helped us to a top 10 finish on Pickwick Lake. On our second stop, we had located a school of fish on a sandbar and had caught several fish. The fish were mostly on the shallow part of the bar and we were about to leave for another spot when they quit biting. My partner noticed some fish on the sonar under the boat in deeper water and turned to cast behind the boat. His first cast resulted in a four pound smallmouth, which was a key in our 10th place finish.

In the ABT Championship at Eufaula, we again relied on my Garmin electronics for a 12th place finish. After determining the right type of depth and contours in practice, we could ride down the lake looking at the map during the tournament to find the right areas to fish. The fish were not in large schools, so we wound up only catching two or three off each spot and needing a lot of spots. After finding the right type of area, a quick pass with ClearVü let us know if there were bass holding or not, and whether we should spend anytime fishing. Again, we had no competitors to deal with on any places we decided to fish.

Those are just a few of the tangible examples of how Garmin electronics helped me have such a successful season this year, but the most important factor cannot be measured. As I mentioned earlier, I use my electronics to find fish more than any other method. I have to have confidence in my equipment, especially my electronics. With my Garmin marine electronics, my confidence is at an all-time high. I know that they will always work as they should; that what I see on the sonar is what is really under the water, and that I am able to see features on the mapping that no one else is seeing. I see places to fish that have been overlooked and I see fish that I may not have seen before. I am already looking forward to 2017 and seeing what else my Garmin electronics will show me!