Our G5 electronic flight instrument is now approved for installation in thousands of type-certificated fixed-wing general aviation aircraft. Installation approval is accomplished via STC with a comprehensive approved model list containing 562 aircraft models. The compact and cost-effective G5 delivers exceptional performance and reliability as a standalone primary source for aircraft attitude or turn coordination information while also displaying secondary information such as airspeed, altitude and more. Availability of this STC is representative of the Federal Aviation Administration’s initiative to encourage and permit specific enhancements to aircraft in an effort to improve safety among the existing general aviation fleet. 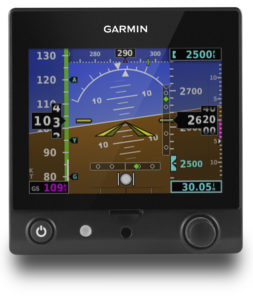 Boasting a bright, 3.5-inch sunlight readable liquid crystal display, the G5 is approved as a primary source for aircraft attitude or turn coordination information and secondary source for altitude, airspeed and vertical speed in a single instrument. Installation is simple and easy as the G5 integrates with the aircraft’s existing pitot/static system to display attitude, airspeed, altitude, vertical speed, slip/skid, turn rate, configurable v-speed references, barometric setting and selected altitude, as well as visual alerts upon arriving at the pre-selected altitude. GPS-based track and groundspeed information is also displayed. A dedicated rotary knob also allows for easy adjustments to barometric pressure setting as well as altitude and ground track bugs.

Suitable for installation in place of a standard 3-1/8-inch (79.4 mm.) flight instrument, G5 measures 3-inches in depth and includes a back-up battery so it can easily be integrated into a wide range of aircraft. Installation is further simplified as the G5 only needs power, ground, pitot and static inputs so it easily integrates with the aircraft’s existing systems. As part of the STC, the G5 includes a four-hour back-up battery and pilots can easily reference battery status in the upper left-hand corner of the display.

We are proud to have been selected as the avionics provider for the 2016 AOPA 172 Sweepstakes, which features the G5 electronic flight instrument as part of the Yingling Ascend remanufactured program. Garmin has worked closely with AOPA and the FAA to lower cost and increase reliability through upgrades to the legacy fleet. The G5 is also accompanied by the GTN 650 touchscreen navigator, GTX 345 all-in-one ADS-B transponder, GMA 340 audio panel, GI 260 Angle of Attack indicator, GTR 225 COMM radio and the Garmin Pilot app on an iPad mini. To see the AOPA 172 Sweepstakes aircraft take on its transformation, visit the AOPA campus at EAA AirVenture, July 25-31, 2016 in Oshkosh, Wisconsin.